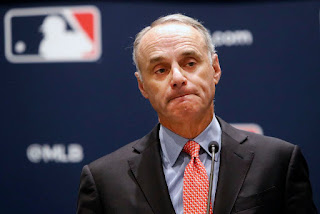 As America tries to navigate its way through the deadly pandemic, Sports returning was going to hopefully be the start of the return to normalcy so many Americans crave and want. It took a long time for the Major League Baseball owners and the Players Association to reach an agreement for how to play, when to play, how many games to play and the compensation for those said games. In all honesty, the MLB wanted to play so badly, they forgot about the one key point that all other leagues have had to address head on during the pandemic. How do you stop the spread of the deadly virus, and what to do when an outbreak occurs?
Three days and three games are all it took for the outbreak to happen. The Miami Marlins had 8 players and 2 other personnel had a positive test result for the Coronavirus this morning. Those players were involved in a game yesterday with the Philadelphia Phillies. That has led to the Marlins and Orioles series opener beginning tonight being postponed and the Yankees and Phillies game also scheduled for tonight has been postponed.
The Marlins traveling squad has been instructed to quarantine in place and the Phillies are also being tested right now. Those have been the biggest outbreaks, but this outbreak could potentially affect 4 teams as the Cincinnati Reds have also had more than their fair share of players who have also testing positive. In fact, the Reds opening day DH Matt Davidson tested positive after the opening day game. He did get the start that day.
Hypothetically, if none of the Phillies test positive or they have very few positive tests that may mean only today’s game against the Yankees is postponed. The MLB instituted a 60-player roster limit this season as a pool of players to choose from. The Marlins are going to have to tap into that, and many other teams throughout the year are going to have to tap into their player reserve as well. The MLB is going to have to strongly look at what to do. Today it is four teams tomorrow it could be 8, then 16, and then finally every team.
Obviously, there were going to be cases, no one ever denied that cases were not going to happen. It was never about getting the cases to zero because that this point that isn’t possible, unless the MLB follows the NBA model and has all of the players in a bubble and every game is played at the same four or five ballparks with staggered start times. The players did not want a bubble, they did not want to be taken away from their families and that is completely understandable, but for the cases to be zero the bubble seems to be the only viable option at this point.
Since a bubble isn’t going to happen the MLB is going to have to work on minimizing the outbreaks and figuring out a way to get the infected players away from everyone else and quickly let those teams play with the rest of their player pool. Does that involve having a backup facility that is cleaned regularly and used in the event of an outbreak at a stadium? Does that involve cancelling those games or removing those teams from competition completely? Do they make masks mandatory for EVERYONE, not just managers I don’t know the answer, the MLB doesn’t have the answer, but we are going to soon find out.
The Red Sox like every team have had key players test positive but they have not had an outbreak or been affected by one yet, however it could affect them in the long run. It could affect every team based on how the MLB decides to move forward. I think a shutdown would be an overreaction but something that is going to be strongly considered by the league especially if they can not get these outbreaks under control. As of now, just mitigate the outbreaks by being smart. Do not be surprised if a mask mandate for all players comes from this.