It's 2020 baseball, which means we got oddities tattooing the calendar. This year's trade deadline is at 4 PM ET on Monday, August 31, a bit later than the standard July deadline. Additionally, this year, the August 31 deadline is the last day on which a player can be traded this season, so there will be no second waiver-induced deadline. 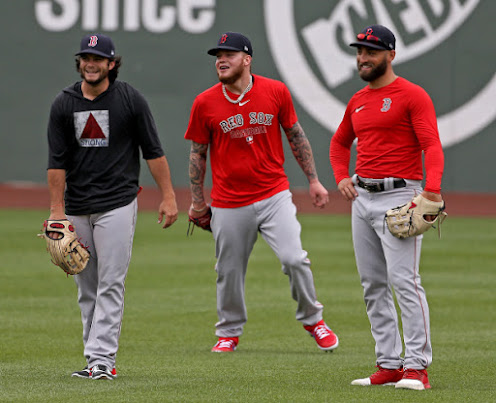 (Photo: Matt Stone/Boston Herald)
Of course, as we approach the deadline, reflection on the state of the Red Sox as a franchise is imminent and speculations have been flying surrounding a team with multiple hot commodities for real contenders in 2020. With Boston already making one big splash in the trade scene, two of the bullpen anchors are now out of Boston. Today, we inspect the realistic expectations of big trades that could include the remaining members of Chaim Bloom’s Red Sox.
Who should be on the table and who’s not? I will primarily discuss the most active names of the 2020 season and will not address organizational pieces such as Darwinzon Hernandez and Chris Sale that will likely not be discussed in trade offers this year regardless (obviously, for different reasons).


I know reading trade rumors posts about your favorite players is not fun. I remember spending 7/31/04 bawling my eyes out about Nomar being dealt (I was 8, give me a break).

But Bloom wasn't brought in to be sentimental. His job is to build this roster from the ground up.

Bloom:
-on being open to trades: “To say that somebody is truly untouchable, you're probably lying to yourself and lying to a player if you do that.”

Given the history of Chaim Bloom’s ability to find talent in value arms and prospects, I trust his ability to fix a mess of a situation and do so without caring about dealing high-quality talent. The evidence that he doesn’t care about popular opinions? A guy named Markus Lynn Betts you might have heard of. That being said, Chief Chaim is not delusional of the market. He knows he needs to win soon to cement his legacy in Boston it’s going to require him to understand who the cornerstones of this franchise are. He realizes that to get back to the winning culture Boston is so used to, they should not be dealing Xander Bogaerts and Rafael Devers, the meat of the lineup for hopefully another decade or so.

Additionally, one of the less talked-about homegrown bats in the lineup, Christian Vázquez, has risen each year into taking the crown as the best catcher in the AL East division. His work with Jason Varitek and improvement as a framer and power threat in the lineup have made him a cornerstone of the franchise. With none of the top 30 current Red Sox prospects being catchers, at only 30 years old, I would not be surprised if Vázquez was a Red Sox lifer, much like his idol Yadier Molina with the St. Louis Cardinals. 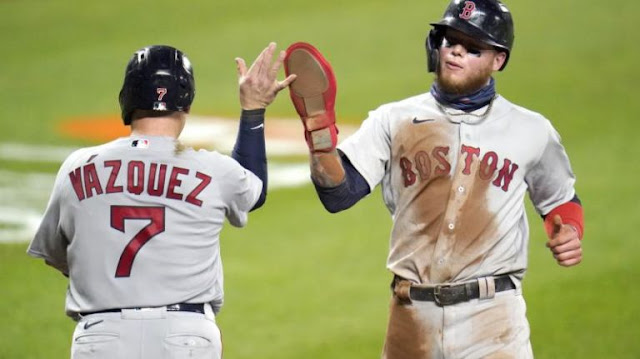 Finally, add latest addition Alex Verdugo to the mix of hitters that could keep the Sox lineup berserk for a long time, mix in his elite defense in the outfield that can be Mookie-esque, and you have yourself the leadoff hitter of the future.

On the pitching side, given the health concerns of Eduardo Rodriguez, any possible return for a man who can pitch like an ace will not be up to par given his iffy future. Rodriguez is still only 27 years old but he is a vet of this team and the Sox should not settle by dealing him this week.

While the names I mention under this category are not untouchable, the Red Sox should be careful with getting lowballed. In these cases, it might be better to hold off on a trade and trust their value with the team down the road than to be desperate to make a deal.


Matt Barnes: Inevitably, a lot of the readers are Matt Barnes haters and your emotions are likely misplaced and irrational. Over the last couple of years, Barnes has been one of the most underrated pitchers in all of baseball, earning him the role of high-leverage work in the absence of a real closer. Each year, Barnes improves on his stuff and in 2019, he was 5% amongst relievers in xBA, xSLG, and whiff percentage. He also led all relievers in swings/misses off his curveball in 2019 and was second, only to Josh Hader, in K/9, thanks to his elite two-pitch combo. Barnes is 30 years old but still seems to have elite stuff, so while the Red Sox can listen to offers, they should be careful to not miss out on the remainder of Barnes’ prime.
As for the rest of the bullpen, there are a couple of solid arms such as Phillips Valdez and Colten Brewer that I think are staying and I want to see more from but I am OK with sending most of them to the moon.

J.D. Martinez: Over the last few years, J.D. Martinez has been one of the best hitters in all of baseball and between 2017 and 2019, he was arguably the best right-handed hitter in the game. It is easy to watch the struggles of a 33-year-old Martinez and think his good years are behind him. But don’t be short-minded. One of the biggest in-game studiers, J.D. Martinez is a hitter that educates himself via video replay and analysis of at-bats, a luxury that was snatched from him by Major League Baseball due to COVID-19 protocols.
I expect J.D. Martinez to return to being one of the best hitters in baseball in 2020 and possibly years beyond that. Just take a look at Nelson Cruz, who at 40 years old, continues to be one of the best power hitters of the generation. If Martinez takes care of his health, he is still a premium bat and getting lowballed this year and assuming he would opt out at the end of the season would be simplistic. If anything, Martinez having a down year convincing him to not opt out this offseason may play in favor of the Red Sox’s future and keep the core of a lineup that poses problems for any pitching staff.
Andrew Benintendi: While Benintendi’s struggles have been arguably the most painful part of the 2020 season, a deeper look into his frustrations should help you realize that the results should not even be all that surprising. Combine some good plate discipline statistics with his freak injuries and you have yourself an unlucky Benintendi in its full glory. Pile on what I mentioned a few weeks ago (a lack of sight from Ron Roenicke to put him in positions to succeed) and you have yourself the worst possible version of first round pick Andrew Benintendi. A playoff hero in 2018 who has already had his ups and downs, trading him while his value is in the cellar would likely result in another imbalanced trade and the returns would likely not excite Chaim Bloom enough to give up a guy who plays the Green Monster better than most we have seen this generation.

$6.3M club option this winter. Not sure what to do with him this week.


Martín Pérez/Nathan Eovaldi: The only two legitimate starters in the Red Sox rotation this season, Eovaldi has shown flashes of brilliance reminiscent of his 2018 heroics and Pérez has just clearly been pitching like an ace or a #2 starter. It may seem obvious to trade such arms while their value exists to a team desperate for rotation help like the Braves, Nationals, or Padres. However, with the Red Sox looking to be competitive in the near future, after they get Sale and Rodriguez are back in the rotation, they will still need depth in the rotation.
At only 29 years old, it could just be the right move to pick up Pérez’s team option for 2021 and see him as a back-end starter given the reasonable price tag. As for Eovaldi, his contract will be tough to move and if the Red Sox can add an established starter in free agency, Eovaldi has value both as a starter and a reliever.

Jackie Bradley Jr.: The Trade-Jackie saga has gotten old and as he nears free agency, the former ALCS MVP has shown who he is — one of the best defensive CF in the game and a bat that can get lava-hot a couple of times a year. He’s spent almost a decade in the organization but an outfield rebuild surrounding your center-fielder is only worth it if you get a good return. Do I think the return will be worth not just resigning him at his probably-reasonable price? No, but I am listening to offers if I am Chaim Bloom because not everybody can be untouchable.

Mitch Moreland: When the Red Sox signed Moreland for the 2017 season, I was overjoyed at the steal, especially with all the talk surrounding Eric Hosmer. In Moreland, the Sox found themselves a cheap gold glover who has a proven clutch factor who also happens to be one of the hottest bats in all of baseball in 2020. What’s painful about discussing a move that involves Moreland is that he is maybe my favorite human being on Planet Earth. I love everything about Mitch Moreland but sitting on this team and being unwilling to absorb some pain isn’t what Chaim Bloom is in Boston for.
With Moreland set to be a free agent after this season again, at 34 years old, there would be several contenting clubs looking to trade for a big lefty bat that can be a rock at 1B — the Rays, Twins, and Nationals to name a few. The return also would likely be solid. That’s all I will say because I will cry watching Moreland leave, but it’s a business.

Kevin Pillar: I raved about Kevin Pillar’s addition to the Red Sox, for the at-bats he can bring against southpaws, for his irreplaceable athleticism that helps make the Red Sox the best defensive outfield in the majors, and now for his newfound leadership in a battered 2020 season. There isn’t much reason to not want Pillar on your baseball team but, again, the returns for a hot bat who is arguably the best defensive OF in the sport should be wildly tempting and if Chaim Bloom can find the right fit, teams would kill for Pillar’s services in a World Series run. All that being said, who knows — the Sox may even trade Pillar and still find a way to get him back with the team in the future for cheap?
Which names do you think are getting traded from Boston this year? Which names are untouchable besides the ones I mentioned? What are you looking for in return? This trade deadline, though peculiar, will be Chaim Bloom's first as the boss of the Red Sox front office. Will he come out of it with flying colors on the way to another banner soon?