It makes sense for people to be revisiting the Mookie Betts trade almost a year later. He's one of the best players in baseball who was a home grown talent, won a World Series with the team, was beloved by everyone, could hit, run, field, and throw, but the Red Sox decided to still trade him in his mid twenties prime. For long time Sox fans in reminded them of the team letting go of Fred Lynn and Carlton Fisk way back in the early 1980's.
The company line that the Red Sox PR machine put out (The Fenway Group also owns the Boston Globe) was that Mookie turned down a big contract offer and they figured trading him, rather than losing him for nothing made sense. Also there was the financial flexibility that a trade would create. Jim Rice quickly came to Mookie's defense and said the idea that Betts didn't want to remain in Boston was BS. Also obviously The Fenway Group are billionaires several times over and keeping Betts would have cost them (John Henry might not be able to purchase a 15th yacht), but in no way would retaining Betts have hurt the Sox chances of winning in the future.
The Yankees could have traded Derek Jeter and Mariano Rivera in their primes as well for financial flexibility and prospects. Do you think that ever crossed their minds? No. And asking either player to take a hometown discount didn't either. Mookie Betts simply wanted fair market value like all super stars do and all people do for that matter. He should never be criticized for that. He didn't not like Boston and demand more to stay here than he could get from another team. He just didn't want to sign a below market deal. Neither did Jeter or Rivera. And similar to the Fred Lynn example, the idea that he wanted to leave to play in California is a false narrative. 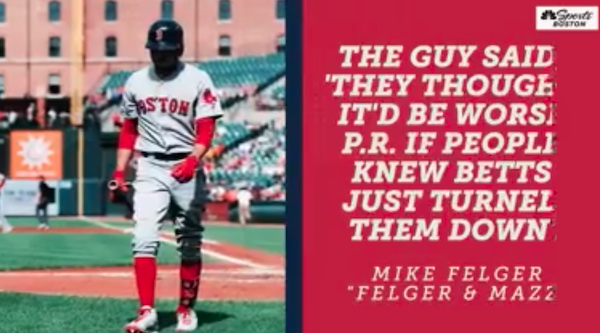 So with all that in mind let's look at Michael Felger's points here. 1. In no way can one believe that the Red Sox would have chosen the PR disaster of looking cheap if the true story was that Betts wanted to play elsewhere. The team, including under the stewardship of this ownership group, have always smeared star players and managers on their way out. Nomar, Damon, and Francona just to name some from the Henry era.
2. If the Red Sox made an offer pre-COVID "similar" to the deal Betts agreed to post-COVID its extremely disingenuous to call those offers the same. it would be like looking at America's unemployment rate a month before COVID hit and three months afterwards and not acknowledging that the main reason for the huge increase was due to the pandemic.
If there was no pandemic, you can be sure that the market value contract Mookie Betts would have signed with the Dodgers or another team in free agency would have been considerably higher than the extension he signed this July with L.A. And yes he signed for crazy money, but all professional athletes make crazy money. So do actors. A-list actors can make what Mookie makes in a year for just one movie.

I always trusted you to get the story right, Peter. https://t.co/zDqp4X00o3

If the Red Sox made an offer pre-COVID similar to what Betts settled for with the Dodgers in the midst of COVID then all that proves is the Red Sox were not serious about signing their generational talent to a fair market extension. And guess what? If the devastation of COVID was even worse in the first three months, Betts extension would have been for even less.
It's the Red Sox prerogative to pay players their fair market value or not. Other big market teams gladly re-sign their homegrown stars in their primes. The Sox acted like a small market team here.
And the Red Sox for YEARS have done a fantastic job with their smear campaigns and PR of somehow getting their fans to buy the company line hook line and sinker and turn their former favorite players into villains. The amount of Red Sox fans that continue to bash Mookie is remarkable. Also it's sad. 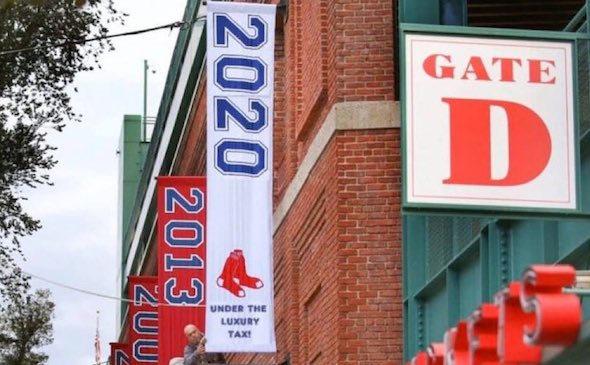 No, the Red Sox didn't offer Mookie a deal prior to trading him that if the Dodgers had offered at the time, Betts would have agreed to. And no the Red Sox didn't keep some mysterious, secret, huge, fair market value for Betts to themselves in some elaborate PR attempt to choose to look cheap instead of unwanted.
I'm sure Yankees fans are happy their team didn't trade Jeter and Rivera in their primes. And I'm sure Dodgers fans are also extremely happy to have Betts and be in the World Series. If you happen to prefer that the Red Sox traded Betts because you like the prospects they received back, you are 100% allowed to have that opinion. But if you have turned on Mookie post trade you have been fooled.