A 24-36 record and last place finish in 2020 left many of Sox nation feeling dubious about the near future of this roster as currently constituted. But don’t make those ‘Fire Chaim’ T-shirts just yet Sox fans, as the next nucleus of future teams playing deep into October could already actually be here and Mr. Bloom has a lot to do with how that came to be. Masked behind having the 4th worst record in baseball last year was a 24 year old Right Fielder (Alex Verdugo) who was top 10 in the American league in hits and top 12 in runs scored, a 25 year old (Bobby Dalbec) who broke records by homering in 5 of his first 10 games in the big leagues and had 8 total Home Runs in just 23 games, and another 24 year old (Rafael Devers) who in what many deemed as a “down year” had the 6th most doubles and the 9th most RBI’s in all of baseball. 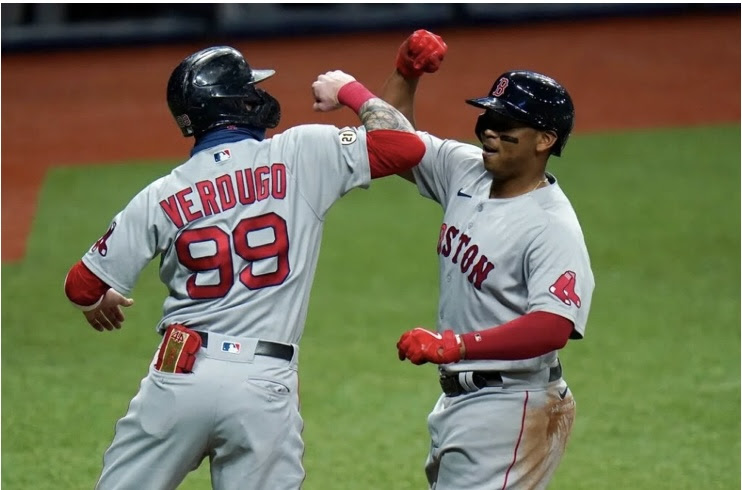 (AP Photo/Chris O’Meara) Not all of the bright spots were just from the batter's box either. Tanner Houck (24) looked border line dominant in his MLB debut as he produced a 3-0 0.53 ERA stat line in 3 starts. All 3 starts being made against teams who played well into October (NYY, MIA, & ATL), two of whom were on the brink of advancing to the World Series. Nick Pivetta (28) also made a strong impression in his brief debut with Boston as he went 2-0 1.80 ERA in 2 starts. Given, with only 60 games being played last season the sample sizes for the success of the young players is limited, but it is hard not to be intrigued or even excited about some of the young pieces that are starting to blossom on this team. This too, is all without mentioning the slowly improving farm system that is developing under Bloom’s short reign thus far. A farm system that includes 2B/SS Jeter Downs, 1B Tristan Casas and CF Jarren Duran, the first 2 being top 70 Prospects on most lists nationally and the other has been skyrocketing through the system for over a year now. All who could end up making their MLB debuts as early as this year. Not to mention the high draft capital Bloom will be working with come July (4th Pick Overall). You couple that young talent with proven, All Star caliber big leaguers (Xander Bogaerts, Eduardo Rodriguez, and Chris Sale) and you might just have a core to contend with for the next 5+ years Sox fans. Now there still remains obvious concerns and questions with this group. Can the young players who produced last year repeat that success consistently going forward? As volatile as prospects are known to be, will Downs, Casas, and Duran truly ever reach their potential? With Bogaerts' opt out looming and E-Rod and Sale’s known health issues, can you really count on your proven veterans to still be here contributing when some of these young guys are ready? All valid questions and concerns that absolutely should be mentioned. But the point is that this is not your typical last place roster. On the contrary, this roster has plenty of talent and young talent at that. 2018 is a year Sox fans love to go back to and with good reason, the team won 108 games and hoisted the World Series Title. But even though that team won it in ’18, that core was truly formulated couple years prior in 2016. That ’16 team possessed two 24 year olds who were beginning to establish themselves as true cornerstones and a young OF who forced a call up by his rapid success in the minor leagues. Sound familiar? That young group combined with proven veterans in the lineup and on the pitching staff exceeded every national expectation and produced a playoff berth after coming in dead last in the AL East the previous year. We might not have seen it coming at the time, but before we knew it there was a young, formidable nucleus that was formed out of a last place roster just the year before that would go on to contend for multiple years. 2021 could be deja vu for Red Sox nation.