Are the Red Sox hip enough to stream as a Youtube experience?

Eric D. Schabell
Contributing Writer
The first free game of 2021 for everyone in the world was this week on YouTube.
As an overseas fan I'm often watching games with a full MLB TV subscription, which provides your choice of televised games using the home or away teams networks. As a Red Sox fan you get NESN with our familiar Jerry Remy, Dave O’Brien, and the wonderful pitching commentary by Dennis Eckersley.
With the YouTube feed you get something else, and as a long time baseball fan I'm pretty sure they are not targeting me as an audience.
The idea behind this free game is to generate interest for the game across the worldwide audience, many of them younger and very much tuned into watching hours of video on this platform every day. I had little choice as my normal access was taken away for this game and, along with the rest of the planet, I was bounce to the streaming channel.
Let's cover all of the ups and downs, in no particular order, that were new, interesting, silly, or just strange marketing tactics.

The first part of the experience is a half hour banter about the game to come between Billy Ripken (that's Cal Ripken Jr.'s little brother) and some young guy named Stephen Nelson who functions as the MC. They are in a small version of the MLB indoor field and spend the first 30 mins giving some batting tips about the players from Ripken and recap babble about the Red Sox and Rays starts to the 2021 season.
Now comes the first bit of promo work that is trying to capture, at least I think that's the idea, the younger viewers. They spend a whole segment on something called Youtube Creator Spotlight. They do a live interview with a streamer whose got a large following around the Mets topics he streams.
Tell me again, why this would be attractive to a Red Sox or Rays fan?
John Smoltz who will be part of the in game announcers team is brought in and asked what his favourite Youtube video is. His task will be pitching evaluation and he tells us how he's linked to the Red Sox because he spent some time there in 2009.
Now we head on to the game.

The game and bag of tricks

The first thing we have to swallow is missing our well informed announcers that are really close with the team and players. The team on the streaming channel consisted of Smoltz, Carlos Pena, and that same young guy as the MC (I forgot his name already).
I will say that Smoltz has many great insights into how pitching works, what we are seeing throughout the game, so I'm happy he was in the booth.
Pena is a good move as you have a long time Rays player who knows a lot about the team and has great insights during the game when allowed to give them. As Red Sox fans, you're going to have to just chalk this one up or turn down the sound and switch to WEEI on the radio feed.
The introduction film between the reporting and start of the game was a bit disturbing, as shown here above with Coco Crisp attacking the pitcher after getting drilled. They felt that it should be hyped that almost 20 years ago the Red Sox and the Rays were going at each other like it was the Yankees rivalry. Feels a bit forced and by taking some selective game footage of players long retired they made it look like an MMA event. Not sure if that's how you want to attract viewers to baseball, but I guess that's what the streaming platform felt was needed to hype the game start.
As the game begins it all settles down with normal commentary and good on field reporting, so nothing wrong here. 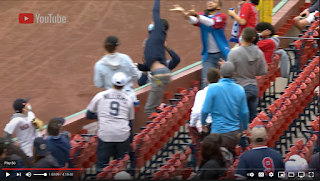 Between the first few innings it's filling the dead time by running film of past Red Sox vs Rays games and we get the great highlights of Rays or the Red Sox winning.
In the bottom of the first inning an interesting play regarding a fly ball hit near the right field wall gets reviewed and over turned as not a catch to end the inning. Many were wondering if, with the high cost of seating and so few fans in the seats, if fans involved in the incident would be removed from Fenway as is usually the case. Rest assured, the fans were allowed to remain.

Nope we still here! I wasn’t reaching over!

With that taken care of we moved on in the game to on field in the dugout interviews with the likes of Martin Perez and Tyler Glasnow, which were really entertaining as Glasnow was almost beaned by a lined foul ball into the Rays dugout (nobody got hurt).
Between the third and fourth innings they showcased a day with JD Martinez in Spring Training, from on the field to hitting some batting practice. This was a fun insight you don't normally get from regular NESN live game coverage.
Throughout the game they had interactive voting if you were a subscriber of the streaming service on who would make the most impact and spent an overly abundant amount of time making sure each of the announcers and on field reporters got to talk about their picks and why they liked them. Kind of got old fast for me with the game going on in the background which was way more interesting.
The also had a player of the game trophy which they put out there to vote on and it cause more of the repeating pop-ups for fans to vote on:

It should be noted that the Red Sox were winning this game so it's apparent that the best players of the day are chosen from the team that is winning.
The game ends with Red Sox winning it 9-2 and you get a full postgame show from the announcers which is something the overseas fan never gets to enjoy as NESN feeds cut out at the end of the game over here. They present the award during on field interview with the winning pitcher and Youtube Player of the Game Nathan Eovaldi.
Boy did he look uncomfortable with this award and almost felt like he might be wondering if this was a candid camera moment. He did promise to put it someplace special, but no idea where that might be?
I guess the take on this for me is that it's a nice change of pace to have to watch through the live streaming but overal as a Red Sox fan I prefer our beloved NESN announcers, their insights, and less fan voting during the game.
As you might disagree with me on this, the next Youtube live and free game will be on April 22, with the Angels at the Astros. Maybe they will have a way for fans to make their feelings known to the Astros?
Post a comment or via twitter @erics_redsox with your thoughts.