If you were paying attention, you could see this coming


The Red Sox are off to one of their hottest starts in franchise history, winning 9 in a row as of this date this article was written and holding the second best record at 9-3 in all of the big leagues. For most of the national and local media, this absolutely caught them by surprise, as most selected Boston to finish dead last in their division this season. And in the defense of many, after last year’s horrid 24-36 performance, a majority of fans turned off and tuned out anything relating to the Boston Red Sox. But for us those who didn’t just look at the 24-36 final record, but watched the games from last year, it was very evident that this was not your typical last place roster. I wrote an article (https://www.redsoxlife.com/2021/03/flowers-need-time-to-bloom-quite-winter.html?m=1) prior to the season on this very topic, that the talent on this team was being criminally underrated and masked by the prior year’s last place finish. Because masked behind the end result, were encouraging results for the future. Results that included a top 5 offense in all of baseball and pitching performances that have continued into this season. So the real question is how surprising is this early success by the Red Sox? 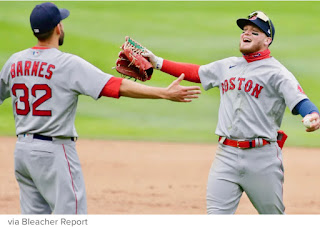 Whose performance has really shocked us? Is it Nathan Eovoldi, who posted a very impressive 4-2 3.72 ERA stat line and looked stronger every time he took the mound in 2020? Is it Nick Pivetta, who since he has come to Boston has not lost a game or gone less than 5 innings in a start, including a 1.80 ERA in 2020? Maybe Eduardo Rodriguez, who many forget prior to missing all of last season finished 6th in Cy Young voting in 2019? Martin Perez, prior to his very last outing of the 2020 campaign, posted a 3.40 ERA. Perhaps it’s the offense that has taken some by surprise. If it did, you really weren’t paying attention. A lineup that finished 3rd in OPS, 2nd in hits, 2nd in doubles, and 8th in Slugging in 2020, a year where they got mediocre performances from their two hottest hitters today in Martinez and Devers should have told you something. You add in typical performances from those two along with Boegarts, Verdugo, Vasquez and Dalbec, and you have a run producing machine, which is exactly what they Sox have been in this early season. Now will Boston be able to keep up this pace for the entirety of the season? Highly unlikely. As well as they have played, this roster is far from perfect and still has its flaws. Combine that with the rigors of a 162 game schedule and they are bound to go through the ebbs and flows of a long season like even the most talented teams do. But what is evident is that this team has talent up and down the roster and that talent will give them an opportunity to compete every time they touch the diamond. Something that was clearly evident prior to the season and prior even to this recent winning streak. Finishing in last place has many detriments to an organization and a fan base, and for this organization it seems the biggest detriment was causing many to forget how much talent was still on this roster. One thing is for certain, if you weren’t paying attention before, you are now.