Raise your hand if you saw this one coming.

As well as they've been playing since that first lost weekend where they were swept at Fenway by the Orioles, it wasn't unrealistic to think that Jacob deGrom, arguably the best pitcher in baseball for the past three seasons, would dominate the Red Sox at Citi Field. 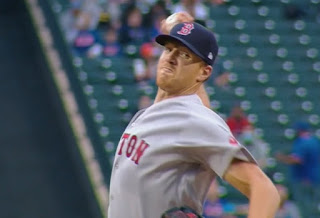 And deGrom was pretty much as advertised, allowing one run on just three hits and a walk over six innings while striking out nine.

It would appear that no one sent Nick Pivetta (pictured) the memo as the Boston righty shut the Mets out on one hit over his five innings of work to improve his record to 3-0 in Boston's 1-0 win over the Mets.

The bullpen trio of Garrett Whitlock, Adam Ottavino, and Matt Barnes combined to throw four scoreless innings allowing just one hit and a walk as Boston improved to 16-9.

Boston's lone run came in the top of the second inning on doubles by Xander Bogaerts and Christian Vazquez.