Now THIS is a Garrett Richards Red Sox fans can really like!

The Boston righty served up a dazzling seven inning performance limiting the Mets to just one run on seven hits as the Red Sox topped the Mets 2-1 Tuesday night in New York. 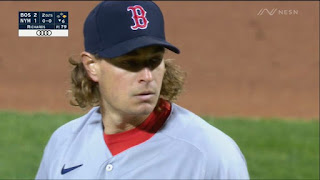 Of particular note - Richards (pictured) struck out 10 without walking a batter. He threw 70 of his 93 pitches for strikes.

After the Mets had taken a 1-0 lead in the bottom of the second inning on a Jeff McNeil solo blast, Bobby Dalbec tied the score in the top of the third with his first home run of the season. The winning run came in the top of the sixth courtesy of an RBI single by Rafael Devers.

Matt Andriese and Matt Barnes came out of the bullpen and each threw one-two-three innings to secure the victory. For Barnes, it was his fifth save of the year.