The Red Sox Should Pray that Kumar Rocker Falls to Them 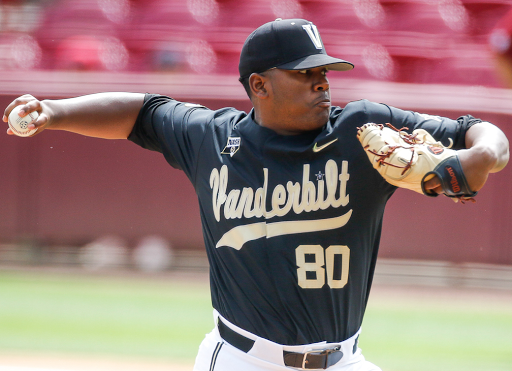 (Photo Credit: Joe LeBlanc, Good Eye Photography)
After an abysmal 2020 season that saw them finish 24-36, the Red Sox earned the right to pick fourth overall in the 2021 MLB Draft.  The only teams ahead of them are the Pirates, Rangers and Tigers. The Sox could have picked even higher if they had not won five of their final seven games.  Usually, the difference between pick 1 and pick 4 is not that stark in an MLB draft.  Unlike other sports, most draft prospects will not play in the big leagues for several years if they ever make it at all.  This year is different, however, for one main reason: there are two starting pitchers in this draft that look like future MLB aces.  Both, coincidentally, play for Vanderbilt and have established themselves as the best arms in college ball.
The first is Jack Leiter, who made headlines earlier this season after pitching a no-hitter followed up by seven no-hit innings in his next start.  That absurdly good start has carried over throughout the rest of the season as well.  He currently owns a 7-0 record with a .98 ERA and a .705 WHIP.  Bottom line: this guy is the best prospect in the draft.  It would be shocking if Pittsburgh allowed him to slip by.  Leiter going number one overall is almost a foregone conclusion at this point.  Barring a serious injury between now and then Leiter can start looking for apartments in Pennsylvania.
The second prospect with ace potential is Kumar Rocker, who many projected as the number one pick in this draft before Leiter's meteoric rise.  Rocker is, quite simply, a stud.  He possesses an ideal physical frame for a pitcher at 6'5" and 255 pounds.  The righty has a fastball, slider, cutter and changeup and throws with a rare blend of velocity and control.  His nastiest pitch is the slider, which he describes as a "power curve."  It helped him throw a 19-strikeout no-hitter against Duke in 2019 and its easy to see why.  The pitch looks tantalizing to hitters until just before it reaches the plate where it dips straight down.  So why, if this guy is as good as advertised, would he possibly fall to the Red Sox at four?
The answer may lie in the fact that two high school shortstops are lighting the scouting world on fire thus far.  The first is Jordan Lawlar from Jesuit Prep High School in Texas.  He is described as a five-tool shortstop that has elite bat speed and the ability to hit to the opposite field.  In the era of the shift that trait is arguably more valuable than ever.  The second is Marcelo Mayer out of East Lake High in California. He, like Lawlar, is balanced in all five tools and some have said that his offensive game is reminiscent of 2020 World Series MVP Corey Seager.  One can see how a team like the Rangers or Tigers could fall in love with a five-tool high school shortstop.
And if I were Chaim Bloom, I would be praying for that to happen.  The Red Sox should thank their lucky stars if Kumar Rocker manages to slip to them at pick four. While Lawlar and Mayer are undoubtedly top-tier hitting prospects they do not fill the biggest need in the Red Sox organization: a long-term answer in the starting rotation.  Kumar Rocker is exactly what they need to solidify their five-man rotation in the near and distant future. 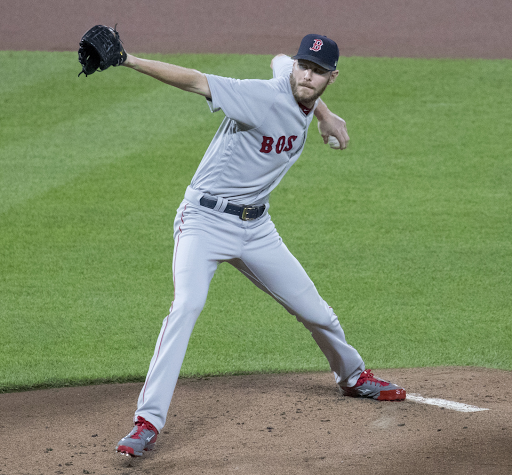 (Photo Credit: Keith Allison, keithallisonphoto.com)
But hold on, you say.  The Red Sox have a good starting rotation this year.  They have five veteran arms that can give them at least five innings per game.  Plus, they have Tanner Houck as an optional sixth starter and Garret Whitlock who may be a starter at some point in the future.  Not to mention the fact that Chris Sale is still rehabbing from Tommy John Surgery and may return this year but at worst would be back at the start of the 2022 season.
To all of that I say great... but it's not enough.  They need at least one if not two young pitchers that could feasibly start for them in 2023 if not sooner.  Why, you ask? Allow me to break down the current rotation's contract situations.  Chris Sale will not be an unrestricted free agent until after the 2024 season, so we know he will be here.  But can he stay healthy?  Even before the Tommy John surgery he had a tendency to show up on the IL in September.  The same can be said for current de-facto ace Nathan Eovaldi who has struggled to stay healthy for an entire season.  He is also scheduled to hit the open market after next season.  Eduardo Rodriguez has typically avoided injury in his career but missed all of last season after a Covid-related bout of myocarditis. If that flares back up there is no telling what it could mean for his career.  He is also a free agent after this season and although it is possible he takes a home-town discount there is no guarantee some team wouldn't pay ridiculous money to scoop him up.
The Red Sox current third, fourth, and fifth starters are also question marks after this year.  Garrett Richards has been horrendous this year and shouldn't be on the team past this season.  Martin Perez is on a one year deal so there is obviously no guarantee he will be in town past this season, let alone by 2023 or 24.  Nick Pivetta has been solid this year with a 3.68 ERA but ideally should not be more than a fourth or fifth starter.
All of this means that in 2023 and 24 the Red Sox starting rotation would probably be Sale and then some combination of Houck, Whitlock, Pivetta and current prospect Noah Song.  Perhaps they resign E-Rod or bring in another free agent between now and then. But factor in the injury issues of Sale and this rotation is pretty uninspiring.  Unless, that is, it also contains Kumar Rocker in the second or third spot.  He would give them a deep, young and mostly home-grown starting rotation, which is something they have not had in a long time.  It also allows for the possibility of letting E-Rod and Eovaldi walk without it being a devastating blow for the franchise.  As we saw in 2020, a lack of starting pitching is the most surefire way to tank a season.
My gut tells me Rocker will be gone before the Red Sox have the chance to pick him.  Detroit and Texas both need to solidify their own rotations and for that reason it's doubtful that both of them become enamored by high school shortstops.  If the Red Sox end up with Lawlar or Mayer (and it would most likely be Mayer) it will still add some much-needed talent to their farm system.  But Rocker, and only Rocker, fills their biggest positional need and fits their window of contention.  Here's to hoping that Chaim Bloom sees a shooting star between now and draft day.