Nathan Eovaldi kept the Yankees offense in check for six innings and Rafael Devers crushed a 3-run homer as the Red Sox beat New York 5-2 in the opener of their three-game series in the Bronx on Friday night. 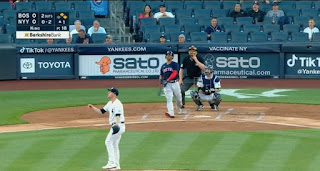 The win was Boston's first at Yankee Stadium since June 2, 2019.

A pair of singles by Alex Verdugo and Xander Bogaerts set the stage for Devers (pictured) in the top of the first inning with the Boston third baseman absolutely crushing a Michael King 0-2 pitch into the second deck in right field.

Eovaldi scattered eight hits, struck out seven, and didn't walk a batter allowing two runs (one earned) before giving way to the bullpen.

Hirokazu Sawamura and Matt Barnes combined to hold New York hitless over the final three innings, striking out a combined eight to seal the win.

For Barnes, it was his 13th save of the season.

With Tampa Bay losing on Friday night, the Red Sox are back to a tie in the loss column in the division (the Rays have played two more games to this point of the season). The Yankees, meanwhile, have lost eight of their last eleven and continue to "showcase" an all-or-nothing offense the chalked up fifteen strikeouts including four by catcher Gary Sanchez.