Are the Red Sox as Good as Their Record?

The Red Sox currently possess a 54-33 record, good for first in the entire American League.  They trail only the San Francisco Giants for the best winning percentage in all of baseball.  And yet many wonder, perhaps fairly, if this team is a legitimate threat to make a deep playoff run or even win the World Series.  Some analysts and, reportedly, opposing front office figures have pointed out some advanced metrics that suggest that the Red Sox are overachieving at this point in the season.
For example, Ken Rosenthal of The Athletic recently wrote a blurb about Fangraphs' Base Runs metric.  Reportedly, "Base Runs projects how many runs a team should score or allow based on the outcomes of individual plate appearances. According to the FanGraphs formula, the Red Sox should be 45-41, nine games worse than their current mark, and only 15th best in the majors" (Rosenthal).  In other words, the Red Sox have been lucky in addition to being good.  Base Runs would indicate that the Red Sox should have allowed more runs and score less runs than they have in reality.  The disparity in expected and real performance could be due to a number of factors: hitting around or over shifts, allowing runners on base but not letting them score, or some intangible "clutch" factor that enables the Red Sox to stay in every game.
Another advanced metric that does not favor the Red Sox is Pythagorean Win loss.  This formula incorporates a teams runs allowed and runs scored and calculates what that teams expected winning percentage would be.  Using the latest Red Sox data, it can be calculated that their Pythagorean winning percentage is .575.  While still good, this is noticeably worse than their actual win percentage of .621.  This means that the Red Sox are statistically expected to be 50-37, four games worse than their actual 54-33 record.  Four games may not seem like a lot, but at this point the Red Sox are only five games ahead of the Tampa Bay Rays.  So, while not the be-all-end-all four or five games could be the difference between the number one seed in the AL and playing in the Wildcard Game.
All of this is to say that the Red Sox may not be as good as their record.  They may be a good team, not a great team and one of the luckier teams in baseball this season.  But at the end of the day, what one might call their true ability might not matter.  Having already banked 54 wins before the All Star Break, the Red Sox are in a great position to make the playoffs even if they regress somewhat in the second half of the season.  According to Rosenthal, "FanGraphs projects the Sox to go 41-35 the rest of the way and win the division with a 95-67 record."  Even if they finish 37-38 in their remaining games they would still have 91 wins.  In 2019, the last 162-game season, 91 wins would have been the 7th best record in the AL. 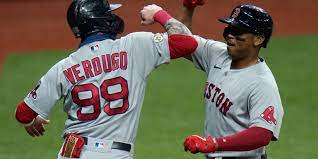 Photo Credit: mlb.com
Why does that matter?  Because it suggest that even with a losing second half the Red Sox have a good chance to make the playoffs.  In addition, the Red Sox have given no indication that they are slowing down any time soon; in fact, they are the hottest team in baseball at the moment.  Add in the unknowns of Chris Sale and any potential trade deadlines and the Red Sox seem like a virtual lock to make the playoffs, even if they are not really as good as their record indicates.
Citations:
Rosenthal Article: https://theathletic.com/2690791/2021/07/06/rosenthal-what-mookie-betts-told-willy-adames-are-the-red-sox-for-real-all-star-thoughts-more-notes/
Pythagorean Win-Loss Calculator: https://captaincalculator.com/sports/baseball/pythagorean-expectation-calculator/
Scoring Statistics: https://stathead.com/baseball/inning_summary.cgi?request=1&year_id=2021&team_id=BOS