Fan Misconduct: How Realistic is Banning Fans for Life?

The Red Sox and Yankees battled through one of the stranger MLB games all season on July 17th, a rainy Saturday in the Bronx. The game was called due to inclement weather and capped at six innings, with the Yankees ultimately prevailing 3-1.  But the main story coming out of that day was not the score or the game itself but rather an incident that occurred when a fan decided to throw a baseball back onto the field, hitting Red Sox outfielder Alex Verdugo. The incident resulted in the fan receiving a lifetime ban not just from Yankee Stadium but from all MLB parks. 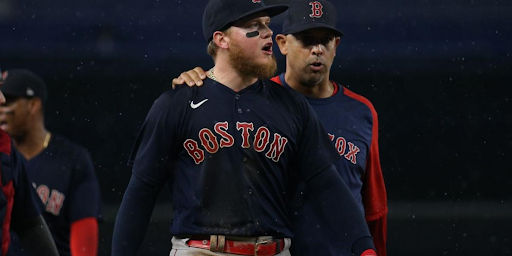 Alex Verdugo after the incident in Yankee Stadium. Image from NBCsports.com
Other incidents of fan misconduct occurred throughout the day as well.  A group of Yankees fans appeared to get into a brawl with a smaller group of Red Sox fans before security were called in.  Two people were ejected and it is currently unknown if the Yankees will restrict their access to the park or if any legal actions will be taken.  Another incident allegedly occurred outside of the ballpark according to Catherine Varitek, wife of Red Sox legend and current game planning coordinator Jason Varitek.  Mrs. Varitek tweeted "What our kids just went through walking to our car in Yankee Stadium was scary" before elaborating in another tweet "Someone SPIT on my [9 year old] daughter for wearing her Varitek jersey."  While trash talk between Red Sox and Yankees fans is nothing new, and is indeed part of what makes the rivalry compelling, incidents like the one described above have no place in baseball or any sport. 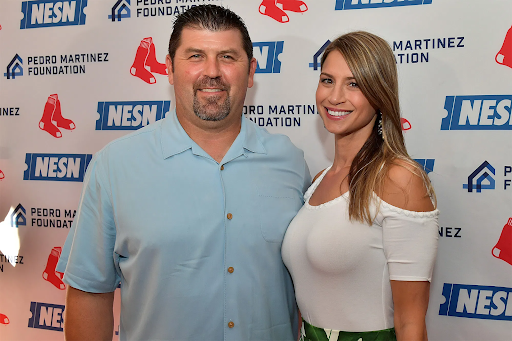 Jason Varitek with wife Catherine.  Image from nypost.com.
The MLB is not the only sport to see a recent uptick in incidents of fans being belligerent or unruly.  When the NBA returned to play in front of live fans there were a bevy of incidents that involved fans throwing objects at players, attempting to spit on them, or directing racial abuse at family members of players.  Clearly, then, this problem extends beyond baseball and beyond the Red Sox-Yankees rivalry.
Perhaps people have been stuck inside for too long. Maybe some have forgotten how to act while at sporting events.  Or it could be that a little bit of liquid courage mixed with the adrenaline of being at a game causes some to act in ways they normally would not.  Whatever the reason, limiting dangerous or abusive fan behavior is essential to ensuring the safety of both players and other spectators.
The lifetime ban certainly sounds like harsh punishment, but one might question how realistic it is to keep banned individuals out of ballparks.  After all, there are thousands of fans entering in rapid fashion, many of whom are wearing ballcaps, sunglasses, and even facemasks.  When asked how they enforce these bans, a Red Sox spokesperson said: “It is certainly difficult to enforce, but our protocol includes sending an official notification that the individual is not allowed on Fenway Park property which gives law enforcement the ability to arrest them if they are found inside the ballpark...We also flag them in the ticketing system so that they cannot purchase tickets or receive them through the ballpark app.”  At least at Fenway Park, then, offending fans risk not only being thrown out of the game but also arrested for trespassing.  That is a penalty some might not be willing to risk just to take in a ballgame.
Still, there are ways that one could theoretically skirt the rules and still get into a ballpark.  Someone could have a friend purchase tickets for them, or simply buy them on the secondary market and avoid using the ballpark app.  They could wear a mask to obscure their face or otherwise change their appearance to avoid being recognized by security.  But, in a futuristic and somewhat dystopian twist, none of these efforts to skirt the system may matter soon if facial recognition technology (FRT) keeps developing at its current pace. 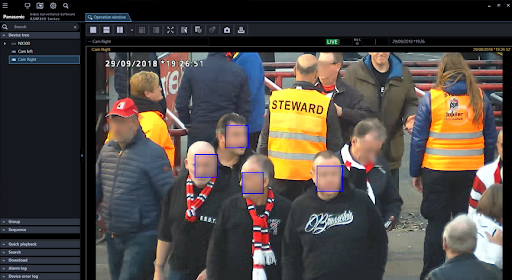 A trial run of FRT at a Belgian soccer match. Image from securitynewsdesk.com.
The increasing efficiency and availability of facial recognition software may mean that it is coming soon to a ballpark near you.  The process of screening fans was described as follows by Shaun Moore, CEO of facial recognition software developer TrueFace: “the new way of doing it is, if we do have entry-level cameras, we can run that person against everyone that’s coming in. And if there’s a hit, you know then; then there’s a notification to engage with that person.”  Gone are the days of security guards being handed photographs of banned individuals and told to be on the lookout for them.  In the near future, fans may be automatically screened upon entry and apprehended on the spot.  Madison Square Garden reportedly already uses some form of FRT to screen its guests, and other arenas and ballparks are sure to follow.
There are questions about both the effectiveness of this technology and its potential to both compromise privacy and incorrectly identify innocent people.  This debate extends far beyond the scope of sports, but the bottom line is that this technology will likely be used soon even if it is imperfect.  According to the Center for Strategic and International Studies (CSIS), "As of April 2020, the best face identification algorithm has an error rate of just 0.08%."  Those in charge of ballpark security will likely view the benefits of FRT as outweighing the costs of occasional misidentification or non-identification. Other outlets have reported that a number of factors including picture quality, obstacles obscuring the face, light and more can obscure the "perfect conditions" that lead to this level of accuracy.  Still, I for one would not want to take my chances of getting caught by this software or go through extensive efforts to obscure my face so as not to get caught.
The lesson to be learned here is this: if you plan on going to Red Sox game, or any other sporting event, don't do anything that might result in a lifetime ban.  As we all learned in a year without being able to attend live games, a lifetime ban is one of the worst things a sports fan can experience.  Buying tickets on Craigslist, risking arrest, and trying to fool facial recognition software is equally undesirable.