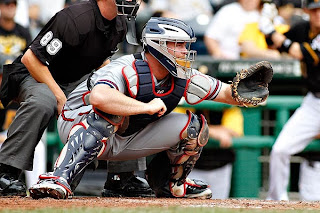 It has recently been announced that the Boston Red Sox would not give Jarrod Saltalamacchia a qualifying offer to return to the team next season, letting him become an free agent. Early this morning Ben Cherrington seems to have set his eyes on a new target to fill the catchers spot, Brian McCann. McCann is a free agent this season, but it is expected that the Braves will give him a qualifying offer in order to get compensation if he picks another team to sign with. McCann is looked at as one of the top free agents this offseason, and one of the best in the Major Leagues at his position. He is a 7 time National League All Star and has hit at least 18 home runs in a season 8 times.
McCann is 29 and will be turning 30 during spring training this coming spring so one would not expect him to be the primary catcher behind the plate for many years to come, but could fill the DH roll once David Ortiz retires. McCann is looking to cash in on an expensive payday, upwards of $20 million a year, and possibly a 5-6 year contract. McCann is an upgrade behind the plate for the Red Sox, both defensively and offensively. He has also been a teammate of David Ross for 4 years when they were both with the Atlanta Braves.
What do you think about going after McCann? Is his price tag too high for someone who is about to be 30 years old. Would you rather see Cherrington try and resign Salty or are you happy that he is being let go? Leave your answers in the comments below or let me know on twitter.