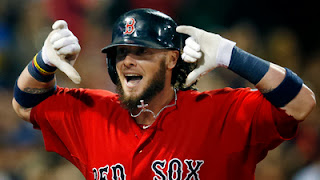 There is absolutely no question who the Red Sox should sign at the catcher position. With Carlos Ruiz (Phillies) and Brian McCann (Yankees) off the market, the best remaining catcher is none other than Jarrod Saltalamacchia. With a bright young group still developing in the minors, it makes sense to bring him back for a few years until players like Christian Vazquez (2013 with Double-A Portland, late call-up to PawSox) or Blake Swihart ('13 with High-A Salem) are Major League ready. Here’s three reasons why Boston needs to look no further than the man who has handled the backstop for the last three-plus seasons:

1) Salty knows the staff – Since 2010, Salty has been the main guy behind the dish, calling games for the likes of Jon Lester, Clay Buchholz and John Lackey. He’s helped Felix Doubront grow as a young pitcher. Why bring in someone new who would have to learn the staff (and vice versa, the staff would have to learn him)? There is already a great pitcher-catcher rapport between Salty and the current pitchers. Let’s keep it that way.

2) With age comes wisdom (and better numbers) – OK, so Salty isn’t the greatest hitter in the world (tied his career high with 139 strikeouts, a mark he’s reached for the second consecutive season), but his production increased dramatically. In his previous seasons in which he’s had over 200 plate appearances (five times), Salty had never hit higher than .266 (2007 with Atlanta and Texas). In 2013, he batted a career-high .273 with an .804 OPS. He drove in 65 RBI – also a high mark for Salty – all while helping his team to 97 wins, an AL East title and doing so at the age of 28. He’s only going to continue to mature with time and the Sox should bank on him becoming a staple in the middle part of their lineup.

3) John Farrell – If no other reason, this is the best one. What Farrell has done with the Boston pitching staff is remarkable. In 2013, the staff recorded a 3.79 ERA, good for sixth best in the AL and nearly a full run lower than 2012 (4.70). In fact, the Sox haven’t recorded and ERA under 4.00 since 2007 (3.87), which also happened to be Farrell’s first season as Boston’s pitching coach and a World Championship year (Even the magical year of 2004, Boston has a 4.18 team ERA). With Farrell, Salty can rely on his excellent coach for knowledge about his pitchers and can continue to learn and grow under his tutelage. It’s the perfect scenario for a 28-year-old catcher to have a manager like Farrell at his side.