What kind of extension can Lester expect? 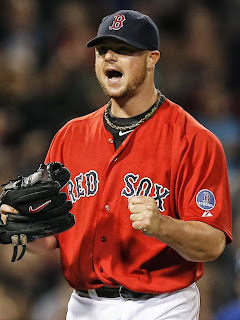 It’s never too early to speculate an extension for a high-profile player. Even though Red Sox GM Ben Cherington has said the Sox won’t discuss an extension with ace pitcher Jon Lester until later in the Winter, surely there have been internal talks about how to handle with care the negotiations.

Lester is coming off a great bounce-back season in which he went 15-8 with a 3.75 ERA, while pitching the most innings of his career (213 1/3). He led the Red Sox staff in wins, struck out 177 batters and, oh by the way, earned his second World Series ring by going 4-1 with a 1.56 ERA in the postseason. In the Fall Classic against the St. Louis Cardinals, Lester went 2-0 in two starts (15 1/3 innings) and gave up one run (0.59 ERA), struck out 15 and walked just one. In Game 5 of both the ALCS and the World Series with each series tied 2-2, Lester picked up the win each time, assuring Boston would take a 3-2 series advantage with a chance to wrap up both at Fenway in Game 6 – which it did.

To summarize, he was on point when it mattered most.

Most assume Lester is happy in Boston and, like Dustin Pedroia, will take less money to stay with the team that has groomed him from the start. However, money talks and that’s where the Red Sox need to be concerned. Pedroia took an eight-year extension for $110 million, then saw Robinson Cano get $240 million over 10 years. Pedey claims he’s fine with that because this is where he wants to be. But Lester saw that and probably feels he can test the free agent waters as well.

Now, Cherington insists talks will commence later this winter or into Spring Training, and a deal probably will get done, but for how much? ESPN Boston has a poll up on its site and so far the majority (roughly 40%) of fans say they would offer a deal of four years and $20 million per year. Coming close behind are three- and five-year deals of the same price tag. Far back are four- and five-year deals valued at $25 million or more.

The guess here is Cherington’s offer falls somewhere in the $19-22 million range for four years, with a fifth year option. Lester turns 30 in January, so that puts him at 35 years old and the possibility of re-working a deal to finish his career in Boston. Anything longer than five years is getting to the point where age becomes a factor. (Keep in mind, John Lackey signed for five years at $16.5 million per year when he was 31, the same age Lester will be when his extension “begins”).

Pitchers typically see their velocity begin to drop around age 34, and Lester would need to prove over the next few seasons that he can pitch to location just as well as he can blowing batters away. Let’s not forget, he’s got a great cutter, but how will that cutter be when he’s throwing it at 88-89 mph instead of 92? That’s why I don’t want to see a long-term deal.

The good news is Lester hasn’t shown signs of his velocity dipping yet, so he can command a high price. Cherington knows that and likes to keep Boston farm-grown guys around, so look for a deal to be on the high-end of that range given. Or maybe higher.