3 Moves Red Sox Yet to Make 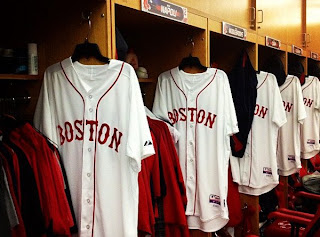 The new year is upon us.

The dust has settled from the winter meetings.

The crazy contracts and big name moves are behind us seeing Jacoby Ellsbury and Jarrod Saltalamacchia depart.

Incoming we have a catcher in A.J. Pierzynski and a relief pitcher added to the bullpen in Edward Mujica.The Red Sox also brought back Mike Napoli.

What is left to be done this off-season?

Here are the three most important moves yet to be made by the Boston Red Sox this off-season.

1. Left side of infield
This issue is around the re-signing, or not, of Stephen Drew. I like the cat-and-mouse waiting game that the Red Sox are playing with him and his market is drying up under his feet as we have seen the last weeks.

With Will Middlebrooks and Xander Bogaerts in the mix I am not so sure they need to re-sign Stephen Drew, but if the price is right I would not mind a bit to see him return for depth on the left side of the infield.

Marc Normandin makes a case for choosing Will Middlebrooks over Stephen Drew, which would put Xander Bogaerts into the shortstop slot. All good arguments, but which way will the Red Sox go?

This is the first move the Red Sox need to make.

2. Starting pitching
The staff looks pretty solid for the coming season but there is an issue around the continuity after this year in the person of Jon Lester. He is the pillar of the Red Sox rotation and might be worth the investment.

Alex Reimer over at BostonInno presents an analysis on the pro - cons to such a deal and what Jon Lester might be looking for in an eventual deal. It won't be cheap but he has proven time and again that he is a solid foundation to the starting rotation.

This is the second move the Red Sox should make.

3. David Ortiz
Proven member of almost everything good that the Red Sox have done over the last decade. Putting aside the 'face of the franchise' talk and focus on the deal in place, the question is should the Red Sox extend him beyond next year when his contract ends.

In November he made it known that he was looking to extend beyond the 2014 season.

Rob Bradford over at WEEI.com caught up with David Ortiz at his charity golf event and the reports was that the Red Sox are working with his agents to extend his contract into 2015. His thoughts on the topic were pretty clear about getting an extension done. “If they’re smart I will,” said the DH when asked if he thought a deal could get done. “You know what happens every time people challenge Papi.”

This is the final move that the Red Sox should get done.

Are there any moves you consider more important and need getting done before the 2014 season starts?