Derek Jeter's Hall-of-Fame career will come to an end Sunday afternoon at Fenway Park in what will otherwise be a completely meaningless baseball game for both the Yankees and the Red Sox.

Both teams are out of the playoffs, and the lineups for the two previous games of this series have looked like something you'd see in the late innings of a mid-March spring training game when the starters have long since left the field and showered.

Have you ever seen anything like this? pic.twitter.com/Qgogv0IhIM
— John W. Henry (@John_W_Henry) September 26, 2014

So with all that said, allow me to get the snark out of the way first.

I agree with much of what Keith Olbermann said this past week about Derek Jeter. In case you somehow managed to miss what Olbermann said, go here and here.

Derek Jeter isn't going to go down in baseball history as the "Greatest Yankee of All Time." There are at least five ahead of him you may have actually heard of - Ruth, Gehrig, DiMaggio, Mantle, Berra. I'd even go so far as to offer up Don Mattingly as a better-than-Jeter candidate. You may have some others as well to throw into the mix.

Derek Jeter isn't the "Greatest Yankee Shortstop of All Time." That Phil Rizzuto character was pretty good, you know.

And for awhile, you could make the argument that Derek Jeter wasn't even the best shortstop on his own team once that Alex Rodriguez fellow - remember him? - joined the Yankees.

﻿
Team leader? It was blatantly obvious that Jeter didn't make Rodriguez's transition to New York any easier. Truth be told, given my own feelings about Rodriguez I probably would have done the same thing, but as I said right from the start, this is the snarky part.

Team player? One could argue that the Captain could have and should have gone to manager Joe Girardi any number of times this year and asked to be moved out of the two-hole in the lineup as it became painfully evident that he wasn't producing well enough to be in the first third of the order.

And don't even get me started on the whole "Derek Jeter Farewell Tour sponsored by Steiner Sports." My first thought on Thursday night when Jeter's teammates dumped a bucket of Gatorade (with the "2" in place of the usual logo) on him was, "Wonder how much Steiner will be charging for THAT jersey?"

Don't get me wrong - I'm a big fan of capitalism, and I've never once begrudged an athlete his mega-contract. But these last two weeks of the season have been more like a QVC Network production than a final well-deserved victory lap for a player of Jeter's stature. Anyone want to buy a rake?

The "flip" play against Oakland in the playoffs? I don't care how many times Joe Torre makes the claim, but I refuse to believe that the Yankees actually practiced that play. One could make the argument that the Captain was actually out of position. And if Jeremy Giambi had slid.... But I digress.

That playoff home run against the Orioles in 1996? It would clearly have been overturned under the current replay rules.

﻿
The patented jump throw? I'm old enough to remember a guy named Bobby Wine making similar plays for the Phillies back in the mid-60's. But again, I digress.

Mr. November? As Red Sox fans, we'll always have Jetes' performance in Games 4 through 7 of the 2004 American League Championship Series to look back on.

Derek Jeter will play the last game of his Hall-of-Fame career Sunday afternoon at Fenway Park. It will cap off what has been a three-day love fest from Red Sox fans. And while details haven't been announced, you just know that Red Sox Executive Vice President Dr. Charles Steinberg and his staff will be pulling out all the stops to honor Jeter. And deservedly so.

Plain and simple, Derek Jeter is everything I want a baseball player to be. And yes, he played hard...and he stayed cool.

He respected his teammates, his opponents, and more importantly, the Game of Baseball. In the PED era of players routinely putting up video game numbers, Jeter's name was never on the list of the usual suspects, even as some of his own teammates treated the clubhouse like a chemistry lab.

He battled his way through each and every at bat of his career. He may never have put up enough league-leading numbers to satisfy the likes of the Keith Olbermanns of the world, but he certainly had his share of big base hits, and I lost count of how many of those came at the expense of the Red Sox over the years. Derek Jeter could beat you with his bat, his glove, and his legs. And as someone who probably watched or listened to 90% of Jeter's career, I can say with confidence that he never stopped trying to beat the opponent no matter what the score was.

For years, I led the "if he played anywhere other than New York he'd be considered just another very good player" crowd when it came to assessing Captain Intangibles. But as the final weeks of Jeter's career have unfolded, I've started to appreciate Jeter in a whole new way. I've also discovered a sense of melancholy that I wasn't expecting.

Some of that came from knowing that Jeter is going through that phase of his life as described by Jackie Robinson when he said, "Athletes die twice." Derek Jeter's athletic mortality is playing out in front of our eyes. In many ways, I think it's reminding me of my own mortality.

The image of Jeter heading out to shortstop once last time following Thursday night's game and crouching down with his hands covering his face, clearly filled with emotion, is one that will stay for me forever. Jeter said more in that moment about his love for the game he played so eloquently for nearly 20 years than he could have said in a month of post-game press conferences.

My 13-year old son wants to play baseball for a living. It's all he talks about. Like any of the tens of thousands of kids who call themselves Red Sox fans, he wants to call Fenway Park "home" some day, and he absolutely despises the Yankees.


But when Jeter dropped that single into right field in the final home game of his career to drive in the winning run against the Orioles, my son found himself filled with emotions he wasn't expecting for the only Yankees shortstop he's ever seen in his brief lifetime. "This is really the end of an era," he said in one of those moments that may be the first time he's felt a part of his own childhood dying. 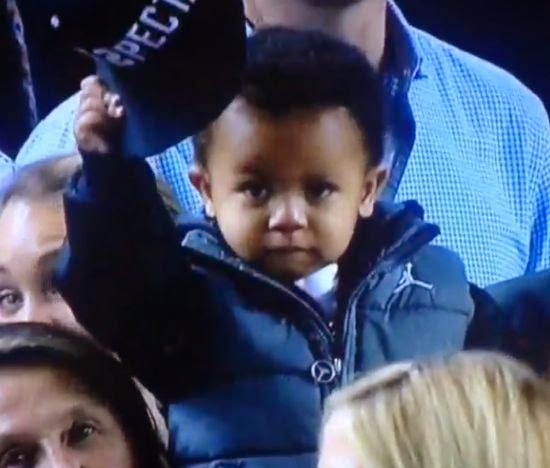 So yes, Keith Olbermann and Derek Jeter's naysayers may indeed have a lot of valid points. But this Red Sox fan is also hopefully objective enough to acknowledge one of the all-time greats.