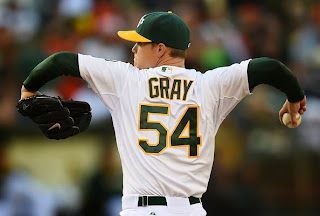 The Red Sox look to bounce back today after another blowout loss, this time against the A's and they might be in for one of the more one-sided pitching match-ups they've had all season. The Sox will send out struggling Wade Miley (1-4 6.91) against the ace of the A's staff, Sonny Gray (4-0 1.65). First pitch is at 3:35 pm.

The A's win last night ended their longest losing streak (6 games) in three seasons and with a win this afternoon, they will have won their first series of the season.

The Red Sox are still looking to find some momentum within the rotation as the season heads into mid-May. One bright spot during last night's game was Steven Wright, who threw 110 pitches in relief but saved the rest of the bullpen from a night of mop-up duty. He might be a strong candidate to replace Justin Masterson from the rotation, who could be headed to the DL after his struggles this season with his velocity. Today the Sox hope for anything positive to come from Wade Miley who is winless in his last three starts to go along with a 7.63 ERA.

- A's Outfielder Coco Crisp has yet to get a hit this season, he's 0-25 after he started the year on the DL. He's 0-38 in his last 38 regular season at-bats.
- A's Shortstop Marcus Semien has a major league high 11 errors on the season. Oakland leads the majors with 35 errors.
- Dustin Pedroia has reached safely in 17 consecutive games
- Steven Wright threw the most pitches for a Sox reliever (110) since 1988