Masterson's next start to be skipped; DL stint probable 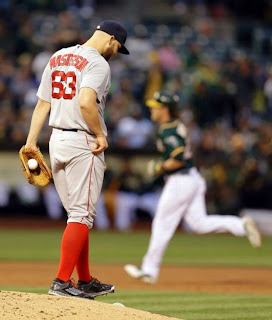 Justin Masterson will be skipped next time through the Red Sox rotation. A DL stint is "probable" according to manager John Farrell. Masterson had another rough outing last night as he just lasted 2.1 innings, gave up 6 runs, and took the loss. He is now 2-2 on the year with a 6.37 ERA.

According to the team, there is no specific injury for Masterson. "There's not one specific area to the arm or shoulder that's a cause or reason why we've seen him velocity or reduced action," Farrell said. "There's some fatigue involved. I think it's important we allow this to calm down. We're going to need to test it at full speed at some point in the near future, but Sunday is out as far as Masterson is concerned." The Sox are essentially citing general fatigue as Masterson's "injury" even though this DL stint is performance based.

Justin Masterson has looked awful his last two times starts. He has allowed 10 runs and 7 walks in just 6 and 2/3 innings. Steven Wright is a potential replacement for Masterson. Wright came on and pitched in relief of Masterson yesterday. Wright threw 5 and 2/3 innings allowing 3 runs on six hits. Brian Johnson is a potential replacement for Masterson as well. Eduardo Rodriguez is not in consideration for the Sunday start since he just pitched yesterday for Triple A Pawtucket.


Thoughts on the "injury"?
Comment below or reach out to me on twitter @Ian_Vescera
Click here to read more posts by Ian Vescera.
Photo and stats via espn.com