Give the Red Sox credit for at least battling back a couple of times. 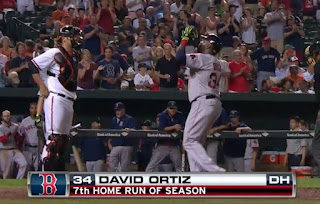 After falling behind 4-0 after three innings, they clawed their way back into the game with three in the fourth and single runs in the sixth and eighth innings, losing 6-5 to the Orioles in Baltimore. The Orioles swept the three-game series and have now won four in a row.

Wade Miley started for the Red Sox; he only lasted four innings allowing five runs on nine hits. Three of those hits were home runs. He and manager John Farrell got into what appeared to be a heated discussion in the bottom of the fourth inning.David Ortiz (pictured) hit his seventh home run of the year in the eighth to get the Sox close. Pablo Sandoval had two hits for Boston including a two-run double, but he also had a throwing error in the bottom of the seventh that led to a Baltimore insurance run.