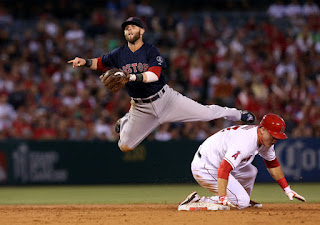 The Angels haven't had a rain out in over 20 years up until last night, so the Red Sox will look to take two today to split the 4 game series which opened up the 2nd half of the season. The Red Sox will have Eduardo Rodriguez (5-2 3.59) to start the doubleheader and will be up against Hector Santiago (6-4 2.33). The Sox will look to avoid their 2nd straight series loss and 4th consecutive loss as they try to figure out whether they're willing to add to this team or start to break down the roster and rebuild for next year.

Since the returning from the All Star break, the Red Sox haven't scored a run yet and after coming back to the lineup, Dustin Pedroia hasn't had a hit either. The lineup as a whole will be what it appeared to be when the season started before injuries mounted, with Mike Napoli and Shane Victorino still hanging onto their roster spots. The team designated for assignment Sandy Leon today and activated Blake Swihart from the DL, which appears to be a purely offensive move to help stabilize the team going forward.

Here is the Red Sox lineup for the first game of the doubleheader:

- The Angels haven't hosted a doubleheader since September 6, 2003
- David Ortiz is hitting an AL worst .144 against lefties this season
- The Angels are attempting to shut out a team for a 3rd straight game, that hasn't been done since 1974
- Kole Calhoun has hit .354 in his last 11 games with 5 homers and 13 RBIs

Have a question for Mike during the game or you see him sitting behind home plate at tonight's game, reach out via Twitter: @86flynn