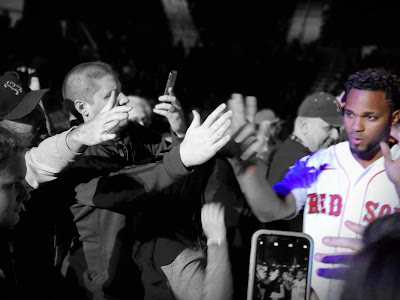 As we post this, the Red Sox are in the midst of hosting their sixth annual Winter Weekend and their first at the new location of Springfield, Massachusetts. Over the last several years, the January weekend, running Friday evening through Sunday morning, has served as a fan fest filled with opportunities for Red Sox fans of all ages to partake in Sox-related activities to keep them warm and ready for baseball in the winter. Events range from panels of alumni to autograph and photo sessions with current and former players to coach clinics for kids and much more. Previously at the Foxwoods Resort Casino, the Red Sox moved Winter Weekend this year to Springfield, with events taking place at MGM Springfield and the MassMutual Center.

The festivities, as always, kicked off with the Town Hall Meeting on Friday night at the MassMutual Center. At the arena-packed event, members of the 2020 Red Sox roster were introduced while players and executive members fielded questions from the audience. This year, alumni David Ortiz and Pedro Martinez as well as alum and broadcaster Jerry Remy made cameos to a full house of cheers. The full Town Hall Meeting will be broadcasted on NESN on Monday at 9 PM for those who missed the live event. Watch on Monday night if you want a chance at seeing Rafael Devers singing and David Ortiz revealing the toughest pitchers he ever faced, moments that didn’t quite make my top 3 list below.

While the Town Hall Meeting has always served as a standard for excitement in kicking off a weekend packed with hype, the brand-new setting, awkward timing, and rapidly-oscillating circumstances set us all up for an unprecedented night at the MassMutual Center. Fans aren’t really sure what to expect out of the fresh faces on the 2020 Red Sox—but as is always true of New Englanders, they let their emotions be heard through their passion. Here are the top moments from last night’s uplifting celebration of the new decade.

#3: Sox give fans their votes of confidence


The fans here at Springfield might not want to admit it but the atmosphere here was cold. As thousands poured into the vicinity of the action on a frosty Friday with face-slapping wind, the combination of a new location and the events in MLB this week made for a tense tone in the air. If you were looking for positivity as baseball season is approaching ever-so-slowly, Town Hall Meeting gave you everything you would have hoped for. Here are some quotes on the perceived success of the transformational Sox.

“We still feel really good about the talent on the roster. This is a REALLY talented group.” — Chief Baseball Officer Chaim Bloom

“[The organization is] excited about the season. The team has a chip on its shoulder. There is no better left side of the infield in the game of baseball than the Red Sox [Devers, Bogaerts]. We look forward to the low expectations set by the media.” — Chairman Tom Werner

“Our group that has been here for 19 years has four champions. We are hungry for more.” — President & CEO Sam Kennedy

“Everybody is going to be giving the division to the Yankees. They are great and improved by signing a top pitcher. But nobody wins [divisions or championships] in the offseason. They win during the season playing games.” — Jerry Remy


Like the ownership or not, this group has gotten the Red Sox four championships in a shorter time frame that it takes a majority of franchises in this league to get one. Call me a damn fool, but I’m taking the bait—this team is not done.

Arguably two of the most adored athletes in New England history, David Ortiz and Pedro Martinez were welcomed to ovations and questions that led to some flashbacks—stories about facing each other, Papi’s acquisition in 2003, and recollection of the grand slam heard ‘round the world, all while also inspiring the youth with some inspiration about hard work, passion, and commitment.

“Absolutely will be a first-ballot [hall of famer] in a few years.” — Pedro Martinez on David Ortiz’s chances at enshrinement in Cooperstown

If you haven’t heard already that the Red Sox need a new manager, that’s a sturdy rock you’re living under so kudos on that. It should be no surprise that the Fenway Faithful present in wintry Springfield want a new manager as soon as possible. And yes, we know you want to throw out the most exciting names on the market. The fans at MassMutual Center made it known—in several separate chants and pleas to hire Jason Varitek as the new Red Sox manager, the restlessness in the arena became so evident that it caught the attention of those on stage several times. A popular candidate to answer questions last night, new chief Chaim Bloom even tried to break the ice with a witty remark of his own after being asked a direct question on the status and process of picking the next Sox skipper.

“If we poll audience here, we can make a decision right now. We need to move quickly but the main focus is getting it right.” — Chaim Bloom

“We will consider both internal and external candidates and are looking to win in 2020, 2021, and beyond. The process needs to happen quickly.” — General Manager Brian O'Halloran

Will the former captain end up being the next head honcho of the Red Sox dugout? Or do you think the Sox need to err on the side of managerial experience?

For a baseball fan, there’s nothing better in the midst of January than sharing a high-five with your favorite player ahead of the season. I got my chance tonight with the X-Man. If you’re here at Springfield, you might get that chance today! If you’re here at Winter Weekend, hit me up on Twitter (see below) if you want to meet up and talk Sox!