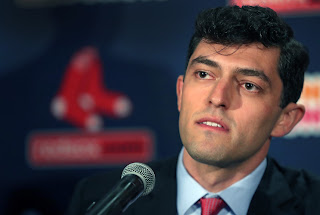 On Sunday afternoon, the Boston Red Sox released their initial 60-man player pool ahead of the July 1 report date. What this means is the players on the list have been invited to the Red Sox's "Spring Training 2.0", which will occur at Fenway Park this week.
Here is a list of the players on Boston's list that will be heading to Fenway:
Pitchers
Matt Barnes
Ryan Brasier
Colten Brewer
Austin Brice
Nathan Eovaldi
Heath Hembree
Robinson Leyer
Chris Mazza
Collin McHugh
Mike Shawaryn
Domingo Tapia
Phillips Valdez
Marcus Walden
Ryan Weber
Brandon Workman
Matt Hall
Kyle Hart
Darwinzon Hernandez
Brian Johnson
Josh Osich
Martin Perez
Eduardo Rodriguez
Jeffrey Springs
Josh Taylor
Catchers
Jett Bandy
Juan Centeno
Kevin Plawecki
Christian Vasquez
Connor Wong
Infielders
Jonathan Arauz
Xander Bogaerts
C.J. Chatham
Michael Chavis
Bobby Dalbec
Rafael Devers
Marco Hernandez
Tzu-Wei Lin
Mitch Moreland
Yairo Munoz
Jose Peraza
Outfielders
John Andreoli
Andrew Benintendi
Jackie Bradley Jr.
J.D. Martinez
Kevin Pillar
Cesar Puello
Alex Verdugo
Any surprises?
Well, as you may have noticed the Red Sox did not select 60 guys to bring to camp, which means they already have their eyes set on these 47 players.
Another one of the surprises is the absence of catcher Jonathan Lucroy. MassLive.com's Chris Cotillo reported shortly after the release that Lucroy would eventually be added to the player pool, as the organization is currently adjusting Lucroy's contract.
Christian Vasquez is obviously the starting catcher, so Lucroy and Kevin Plawecki will be battling for the backup job.
The only other big surprise to me is the fact that Jeter Downs was not included in the player pool. Downs, of course, was one of the big pieces in the offseason Mookie Betts trade. While Downs seems to be the Red Sox's future starting second basemen, he wasn't added to the roster likely because of the fact he doesn't play a lot of positions.
As you may have noticed, Connor Wong, who was also packaged in the Betts deal, was added to the player pool because he can play multiple positions including catcher, which makes him more valuable than Downs in this situation.
Bobby Dalbec is a player to keep an eye on this summer over the next three weeks because he might show up on the big league roster at least in the early part of the season when Boston is allowed to have more players on the roster to protect their starters.
Dalbec is one of the Red Sox's top prospects and seems to be a key piece of the Sox's future at Fenway Park.

Ben Fadden
Passionate Red Sox fan looking to share his opinion with all of the readers. You can let him know what you think @benfaddenmlb on Twitter.
Newer
Older