Unsurprising results of the 2018 Red Sox investigation are here! 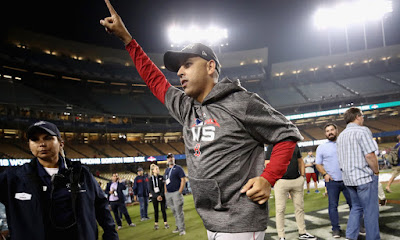 In honor of Earth Day 2020, Rob Manfred and Major League Baseball decided to revisit their home planet this afternoon and finally announced the results and consequences of the sign-stealing investigation related to Alex Cora and the 2018 Boston Red Sox.

*Ban of replay operator J.T. Watkins through 2020 playoffs and from doing same job in ‘21.

*Ban of Alex Cora through ‘20 playoffs, but only for conduct with #Astros.

In other news, the Red Sox did nothing wrong as an organization. For those who don’t have access to the article on The Athletic describing the results, let me have the pleasure to share the relevant details.

If you are surprised by the lack of a significant punishment, you clearly didn’t read my explanation of the investigation. While the original article revealing details of the Astros’ scandal mentioned the 2018 Red Sox as a possible team to violate sign-stealing rules set forth by Major League Baseball, the investigation has shown that any violations committed by the Red Sox came strictly out of the video replay room and the coordinator for the Red Sox, J.T. Watkins, who has been charged with a temporary ban from MLB this season (whether or not the season occurs) and a ban from the position effective through 2021.

In particular, for the stupid fans rushing to point fingers, MLB clarified that the violations from Watkins and his usage of the video replay have no relation or similarity with the blatant and blasphemous violations of the 2017 Houston Astros. The report clarifies that no players were voluntarily involved in gaining an unfair advantage at intercepting signs to decipher pitches, which removes the doubt that players were directly cheating in-game to find out what pitch was coming before it was thrown. Furthermore, there was no illegal usage of the video replay room during the 2018 postseason or 2019 regular season, completely shutting down the idea that the Red Sox did not win their title fairly.

The Red Sox will also lose a second round draft pick in 2020, but I care as much about that as the Astros cared about their PR skills. All in all, the fact that the Red Sox even got a minor slap in the wrist for Watkins' slip-up is actually absurd to think about given how the Yankees, who have associations with both Carlos Beltran and the Apple Watch incidents from 2017, have not been investigated. Finally, the report also clarifies that 2018 Red Sox manager Alex Cora, who was fired three months ago, was innocent in his time with Boston. Very interesting...


So what does this mean for the Red Sox?

Now that we got the boring stuff out of the way, how do these results impact the future of the team? For starters, MLB fans who were sharing their Astros anger with the Red Sox for winning a title can first apologize for the accusations, then move on with their lives. As for the Red Sox, they can focus on health and baseball again and the most interesting topic of discussion becomes the manager position.

It wasn’t too long ago that I alluded to Alex Cora being one of the best things to happen to the Red Sox recently. While his actions with the Astros hurt and he was rightfully punished for his involvement with the biggest scandal in sports right now, he is now 100% clear of wrongdoing with the Red Sox. He’s brought nothing but good things to the city of Boston and was only let go of because of his shady past. We all have a past. We’ve all made mistakes. While not many will be able to forget about Cora’s past, it certainly can be forgiven, given his role in Boston. Should Alex Cora be re-hired when his suspension is over?

I’ve been back and forth on this matter. While I was happy the Red Sox let go of him before the investigation results came out, he also never really needed to leave Boston. Is there a realistic chance the Red Sox will want to bring back their champion manager? Let’s visit all the signs, shall we? I promise, no pun intended; I literally typed that sentence and then realized the coincidence.

In the span of less than an hour since the results of the investigation were published, Alex Cora has already been spotted liking tweets about his possible return to Boston in 2021 and Red Sox President & CEO Sam Kennedy even reiterated Cora’s innocence in his statement acknowledging the results, all while Ron Roenicke is the "interim" manager for the Red Sox.


We already know how the players feel. How do you fans feel? Should the Red Sox absorb Cora’s checkered past and bring back his outstanding player management, bullpen management, golden touch, and winning mentality back to Boston? Or should the Red Sox refrain and start on a new slate? Alex Cora will always be #MyManager, but is he really worth risking the doubt from the rest of the league if he manages for the Red Sox again? You tell me.

P.S. This article is longer than the report from the commissioner detailing the investigation, which he said "he just hadn't had time to type up and turn in." I took 20 minutes to write this up. Rob Manfred took 3 months. Let that sink in.